How Divine Providence Saved My Grandmother's Life in the Holocaust

- by Chaya M. Lilove -
My grandmother Ruth Goldberg was born in 1930 in Berlin, Germany. When she was in 8th grade, World War II was starting. She and her only sister Beena had to move with their parents many times throughout Germany. 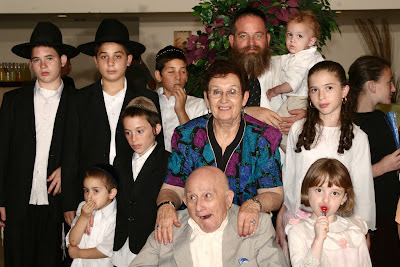 When the Nazis came to their city, they had to go into hiding. They found a gentile family that allowed them to hide in their basement on their farm. My grandmother went to school in the village nearby passing herself off as a non-Jew.

Her family had to hide and she was the only one who could leave the house to go to school.
After the war ended, my grandmother and her family moved to Israel and lived in Kibbutz Kfar Szold in the Golan. She then joined the Israeli Army and after she completed her service she attended and graduated nursing school in Hadassah Hospital in Tel Aviv.

She met my grandfather originally from Poland in Germany after the War before coming to Israel and seven years later they got married in Israel. From there they moved to Houston, Texas where my grandfather was already living near his only surviving brother.

They lived there for 43 years and had three children, the youngest and only girl being my Mom before making aliyah to Jerusalem seven years ago.

My grandmother was a nurse in Houston and went back to school and specialized in Psychiatry. She taught in University and was also the director of Nursing for a hospital. She also taught in Hebrew school is her spare time on Sundays.

She’s now retired but never stops learning. She recently became a tour guide studying archeology, history and religion for two years, and also volunteers at the Bible-land Museum in Jerusalem. She speaks fluent English, Hebrew and German and is a world traveler.

My grandmother is a very giving person and took me to Paris to all the Museums for my Bat Mitzvah present. She always helps her children and grandchildren whenever she can especially with advice using her wisdom and experiences. I learned from her that you should try to help others whenever you can even with a kind word.

My grandmother had a difficult childhood moving a lot from place to place and she learned how to adjust in every situation. She told me that she always demanded a lot from herself rather than from others.

My grandmother told me this story that happened during the War:

‘’We were hiding in Bad Flinsberg in southeast Germany. It was winter. We were hiding in a small apartment, with one small kitchen and one small bedroom. I was the only one who could be officially seen, because at age 12 I didn't need identity papers). Somebody knocked at the door and immediately stepped into the kitchen (I forgot to lock the door) and then into the bedroom to install double windows (it was winter and very cold). He was the owner of the apartment and he was a big Nazi. When my parents heard him coming, my mother went into the closet and my father under the bed (this was something previously agreed upon in case somebody by surprise steps into the apartment), but the owner, Mr. Schieberle, stepped into the bedroom so fast that my father was unable to pull his hand underneath the bed. Mr. Schieberle was standing in front of the bed touching my father’s hand with his foot without looking down and thought this was a house shoe and while pushing it away, my father quickly pulled his hand underneath the bed. If he would have looked down and saw a hand, we all would not be alive anymore.’’
* * *
My grandmother is a remarkable woman who always looks for new challenges and experiences. She is always supportive of anything I wish to achieve and I love her very much. When I grow up I want to be just like her.